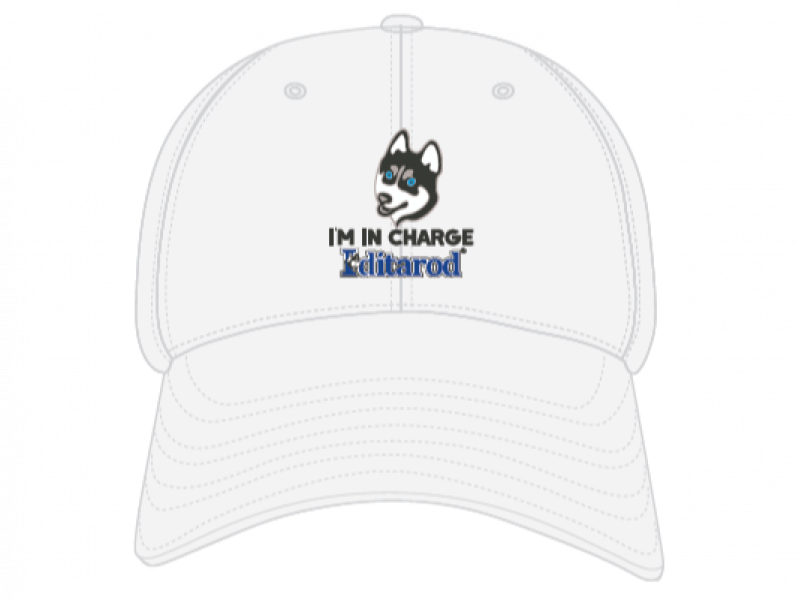 Enjoy this humorous hat that says "I'm In Charge" with the Iditarod logo printed in the front / center of the hat, referencing all the champion lead dogs of the Iditarod racing the trail each year.

A lead dog refers to the dog that leads a sled team, setting direction and regulating speed, an integral member of the team granted significant responsibility for keeping the team motivated and moving smoothly.

Celebrate all the lead dogs in your life!

The race's namesake is the Iditarod Trail, which was designated as one of the first four US National Historic Trails in 1978. The trail, in turn, is named for the town of Iditarod, which is a historic Athabaskan village and a check-point for the race.

Portions of the Iditarod Trail were used by Alaska Native peoples for hundreds of years and the trail was also used by Russian fur traders in the 1800s and coal and gold miners during the Nome Gold Rush of 1898.

The most famous event in the history of Alaskan mushing is the 1925 serum run to Nome, also known as the "Great Race of Mercy." It occurred when a large diphtheria epidemic threatened Nome and dog teams were commissioned by the Governor to deliver the antidote via dog sled.

The official finish line is the burled arch in Nome, Alaska. The tradition is that a Widow's Lamp is lit, a tradition that started based on the kerosene lamp lit and hung outside a roadhouse when a musher carrying goods or mail was en route. The last musher to complete the Iditarod is referred to as the "Red Lantern".

The Iditarod Trail Committee honors the legacy of the Alaskan sled dog and the ingenuity of the Alaska Native people who have used dog sled transportation for millennia.

The race challenges man and dog against Mother Nature's rugged wilderness and is a testament to the bond between musher and our greatest friend and athlete: the sled dog.