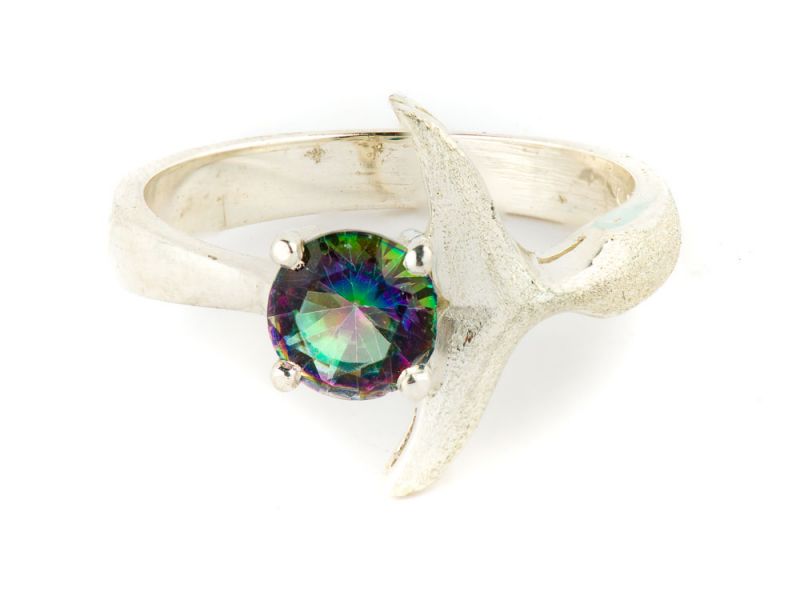 By The Local Jeweler

Are you looking for a local piece designed, hand crafted, and perfected by our very own local jeweler? Then look no further than this beautiful northern light's mystic topaz whale tail ring in silver.

Northern lights mystic topaz displays a stunning and shimmering rainbow effect with vivid mesmerizing colors. This flaming kaleidoscope is considered one of the most beautiful new gemstones introduced during the 20th century.
Topaz is derived from the Greek word "topazion " which stems from the Sanskrit "tapas" meaning fire. This blazing gem has long been associated with the Egyptian island of Topazios now known as St. John's Island found in the Red Sea. Topaz has a clear luster and perfect cleavage a quality it shares with diamond. It reveals a distinct play of colors.
Beaming with brilliance this gem is named in honor of the "northern lights" or Aurora Borealis effect.
Murat Ozuzon is a year-round Skagwegian and master craftsman.
Exclusive design only available at The Local Jeweler.
Topaz ranks 8 on the Mohs hardness scale.